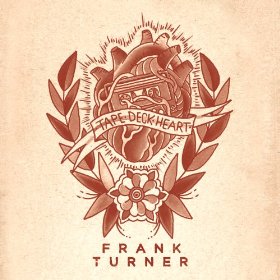 Frank Turner’s fifth album is also his major-label debut, but don’t let that scare you: Tape Deck Heart is a beautiful, vital representation of the journey the singer/songwriter has spent in the past seven years as a solo artist, plying heartbreakingly honest lyrics driven by sharp musicianship. Words like “folk” and “punk” no longer apply to him; one can simply sum his music up by saying it’s fantastic. Labels need not apply.

Turner came up through the punk scene by necessity, playing solo shows wherever he was welcome, touring hard and signing with one of the genre’s most reputable record labels, Epitaph. But anyone who’s ever spent a significant amount of time listening to any of his albums knows he’s more than just some punk rocker with an acoustic guitar. His ability to tell a compelling narrative goes above and beyond your average Warped Tour act. Just take one listen to Tape Deck Heart’s finest moment, “Plain Sailing Weather,” and you’ll wind up with an ache in your chest: “The problem with falling in love in late bars/Is that there’s always more nights, there’s always more bars/The problem with showing your lover your scars/Is that everybody’s lover is covered in scars.” Secretly, we all kind of want Frank Turner to become as absolutely massive in America as he is in the U.K., as he’s better than the scene in which he’s been reared (see also: the Gaslight Anthem).

Kudos should be given to Rich Costey, too, whose production skills deliver a record that is at times fragile (“Tell Tale Signs,” a devastating breakup song), rollicking at others (the campy “Four Simple Words”) and even a bit avant garde by its end (the droning finale “Broken Piano”). Costey is best known for producing Muse’s most epic, grandiose moments yet none of that slick, booming vibe bleeds into Tape Deck Heart. “Losing Days” feels like the kind of song Robert Smith would write for the Cure if he had spent an extended period of time opening for the likes of Flogging Molly and Dropkick Murphys, as Turner has—it’s a punchy, melancholy number with a great mandolin part, and its melody carries a level of cozy familiarity you’ll swear you’ve heard it before.

It’s worth noting that unlike 2011’s England Keep My Bones, Tape Deck Heart is light on traditional folk elements. This allows the record to stand more on its own two feet without sounding too much like Turner’s back catalog. Sure, his accent is still present, but he adapts it to fit with more conventional rock elements (“Polaroid Picture”) to great success.

At its core, Tape Deck Heart is the kind of record we’ve all always wanted Frank Turner to make. He’s unafraid to rock, but also confident enough in his songs to display astounding amounts of fragility and human weakness in his lyrics. Now if only the rest of the world would listen and take its cues from him, we’d be set for life.