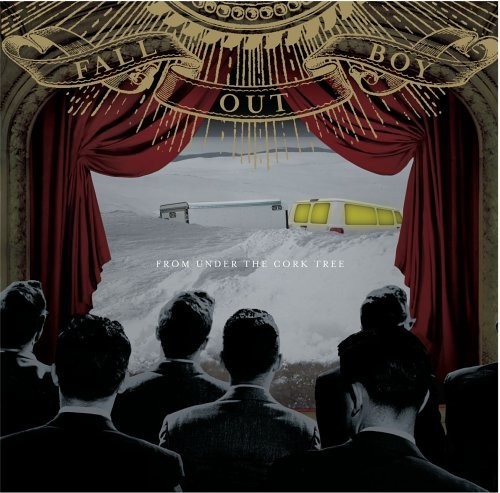 From Under The Cork Tree

They say you write what you know. For David Sedaris, it’s Obsessive-Compulsive Disorder. For Morrissey, it’s depression. And for Fall Out Boy bassist and lyricist Pete Wentz, it’s what we can only assume is a shattered-into-1,000-pieces broken heart. We don’t know the reluctant muse who inspired sentiments such as “So wear me like a locket around in your throat/I’ll weigh you down/I’ll watch you choke/You look so good in blue” (“Nobody Puts Baby In The Corner), but we’re not sure we want to, either. However, love her (which Wentz obviously did) or hate her (which Wentz obviously does), we have to thank her for shaping the backbone of the band’s sophomore album, From Under The Cork Tree.

Musically, the songs on Cork Tree aren’t really that different from the anthems you shook your fist to on Take This To Your Grave; the guitars chug along faster than a runaway train car on the L (“Our Lawyer Made Us Change The Name Of This Song So We Wouldn’t Get Sued”); the drums bottle up and explode like a battery bomb (“Nobody Puts Baby In The Corner”); and the bass provides the throbbing pulse that makes the whole thing tick (“Dance, Dance”). However, it’s lyrically where Fall Out Boy really push themselves to the top of the boy-meet-girl, boy-loves-girl, boy-gets-heart-trampled-by-girl heap. Okay, so some of the titles are a tad long (“You’re A Concrete Boy Now [Do Your Part To Save The Scene & Stop Going To Shows],” which takes its namesake from a vital scene between Robert De Niro and Leonardo DiCaprio in This Boy’s Life) and a pinch self-indulgent (“I Slept With Someone In Fall Out Boy And All I Got Was This Stupid Song Written About Me,” which features a call-and-response growlfest between Wentz and New Found Glory guitarist Chad Gilbert). But It’s lines like, “Why don’t you show me the little bit of spine you’ve been saving for his mattress/I only want sympathy in the form of you crawling into bed with me” ("Dance, Dance"), that prove Wentz isn’t just a lyricist, but a true writer.

Much as Andy Warhol took everyday objects and made them into art, so does Wentz. For anyone who’s ever been broken up with, cheated on, lied to and basically all-around wronged, who can’t connect with a line like, “I used to waste my time dreaming of being alive/Now I only waste my time dreaming of you?” ("Of All The Gin Joints In All The World") Not only does vocalist Patrick Strump do an amazing job bringing Wentz’s words to life, but he’s also got some help from Panic! At The Disco’s Brendan Disco (on “7 Minutes In Heaven (Atavan Halen)”) and William Beckett from The Academy Is… (on “Sophomore Slump Or Comeback Of The Year”).

Over the past two years, the rise of Fall Out Boy has been exponential. Maybe it was the band’s deep-seeded and cred-worthy roots in the Chicago hardcore scene, or maybe it’s their ability to write concise, three-minute pop-punk romps drenched with the perfect balance of wit and self-deprecation. We’ll probably never know. In “I’ve Got A Dark Alley And A Bad Idea That Says You Should Shut Your Mouth (Summer Song),” Strump questions whether he’ll be known for his hits, not just his misses. Judging from the strength and stride of From Under The Cork Tree, we’d have to answer with an emphatic yes.