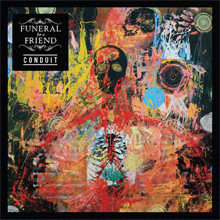 Funeral For A Friend

With 2011’s Welcome Home Armageddon, Funeral For A Friend distanced themselves from the pop stylings of 2007's Tales Don’t Tell Themselves and 2008's Memory And Humanity, having gone on to altogether drop those records from their live set despite their popularity with their fans. Conduit sees them further embracing a post-hardcore sound more aligned with their origins, and with only two of the 11 tracks breaking the three-minute mark—and the whole thing clocking in under 30 minutes—it is a lean, direct, punchy record.

This change of focus does not mean that the Welsh quintet have eschewed hooks. They may go for a straight-up hardcore assault occasionally (“Grey,” the title track), but the record still boasts a handful of massive choruses and some seductive melodies that in most cases enliven matters. On opener “Spine” and “Elements,” the band weave those melodies into the fabric of the songs rather than reserving them for specific sections, giving both a somewhat plaintive, haunting air. The tightly picked lead underpinning the crescendo in “Death Comes To Us All” elevates it from middling to something special. However, the best tracks are the ones that boast the biggest choruses, that of “Nails” inflected with despair while the surging refrains of “The Distance” and “Best Friends And Hospital Beds” would have sounded at home on their first couple of records. That they offset the latter against a snarling verse that could be old-school Metallica gives it even greater impact, though the track is blighted a little with a hackneyed breakdown. In fact, the record’s biggest weakness lies in breakdown territory, and without exception these stomping sections are too predictable and do little to contribute to the overall energy or personality of the individual tracks, or the record as a whole.

That the band are pushing into their 12th year is to be commended, and Conduit proves that they still have that magic, albeit in a more hit-and-miss manner. Opting to avoid the more radio-friendly sounds that might stand to draw them a bigger audience share is also a move that shows integrity, and it suggests that for better or worse the band have no intentions of going away any time soon.