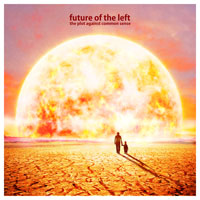 Future Of The Left

The Plot Against Common Sense

For Future Of The Left’s third album, frontman Andy Falkous and drummer Jack Egglestone are fortified by a second guitarist (Jimmy Watkins), a new bassist (Julia Ruzicka) and some new synthesizer settings, all in the name of high-decibel spleen venting. This time out, the Lefties are pretty tempered, at times trading velocity for mood (“City Of Exploded Children”) and the occasional jokey histrionic display (dig the gruff Yankee dude-setto on “Camp Cappuccino”). But the paydirt is when the band flail in jagged, spiked glory (“Anchor,” “Sheena Is A T-Shirt Salesman”) and channel everyone from Fugazi to Hammerhead. Come for the rock, but stay for Falkous’ sarcasm-dripping bon mots such as “If Michael Bay wants a bigger house, let’s help him” (“Robocop 4 – Fuck Off Robocop”) and “Where were you when Russell Brand discovered fire?” (“Notes On Achieving Orbit”).