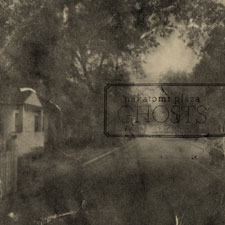 19th century American author Horatio Alger taught us that hard work and persistence leads to great reward. This dictum has never been less applicable than to music. Oftentimes the hardest working and gifted bands go cruelly unnoticed. Such has been the case with recently defunct Brooklyn group Nakatomi Plaza. The band logged in serious time and effort over the course of a decade. Ghosts, their swansong, finds the trio going out on an astronomical high.

On Ghosts, the band temper past fury and experimentation with a straightforward melodic rock attack. There's a pop-punk feel to a lot of the material (though without that genre's more annoying traits). Frontman Oscar Rodriguez is far too invested emotionally to sing about banal topics. Solid 4/4 rhythms dominate with effective choruses. If your band trades in the tried and true, you'd better be able to deliver tons of passion and melody–Nakatomi Plaza mesh both into a compelling amalgam.

Rodriguez also shines with white-hot guitar licks, particularly in "The Ghost Intrigue." It's those delicious guitar hooks that make these songs memorable. Meanwhile, his and bassist Al Fair's vocals complement one another perfectly, as in the sizzling "Bomb Shelter." Though in the hands of a less-skilled band, these songs would be indistinguishable from one another, Nakatomi Plaza give each a distinctive flair.

It's a shame the band hit their stride on their finale. One can wistfully wonder what could have been had they continued. Of course, the music biz being what it is, only the diehard few may have noticed. We tend to bury our best before they have a chance to shine.