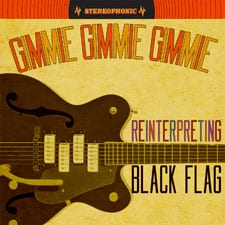 In 1984, punk fans could laugh off the ridiculous conceit of the Circle Jerks as a lounge band, stumbling clumsily through an acoustic rendition of "When The Shit Hits The Fan" for the Repo Man film and soundtrack. A quarter-century later, will they still be laughing when they hear a collection of Black Flag tunes turned into lightweight rockabilly and surf pop, let alone when they hear that it not only features former members of the L.A. punk giants (former frontmen Dez Cadena and Keith Morris as well as former bassist Kira Roessler) but also fellow SST Records icons like Joe Baiza (Saccharine Trust) and Mike Watt (the Minutemen)?

True, this isn't the first time that the Flag have had their songs softened by well-meaning fans (see: Camper Van Beethoven's woozy take on "Wasted" or Uncle Tupelo's sweetly rendered version of "Gimmie Gimmie Gimmie"). But it so many of those cases, it was done as a heartfelt tribute to an influential group. This, on the other hand, is sheer folly, made with tongues of its creators planted firmly in the cheeks.

But to what end? The appeal of this six-song EP is decidedly minimal. Young Black Flag fans aren't likely to give this the time of day. Longtime fans might giggle a bit at the swooping strings and Tammy Wynette-style backup vocals on "Gimmie Gimmie Gimmie" (led by Roessler) and hearing "Six Pack" turned into a high-stepping shuffle by Cadena. Ultimately, this is a disc that's going to linger well into the background of Black Flag's history, rightfully overshadowed by the work that made that band so iconic.