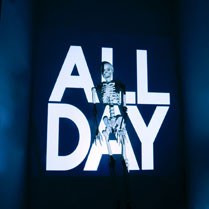 While it probably takes a mashup lifer (or at least someone with more than a passing knowledge of AdobeMulch and/or Adobe Audition) to fully understand all of the subtle nuances of All Day, most people who have a passing knowledge of Girl Talk will appreciate that it seems like a step forward. Last we heard from DJ Gregg Gillis was 2008’s Feed The Animals—his fourth full-length since gradually becoming among the world’s preeminent mashup DJs. That album again demonstrated Gillis’ next level ability to combine Radiohead with Blackstreet and Kelly Clarkson with Nine Inch Nails. To a casual observer, there’s almost nothing separating his latest, All Day, with any of his other work: It’s still samples stacked upon samples of relatively well-known material that hits you in just the right spot in your mind between the nostalgia and irony synapses.

We won’t even try to identify all of the samples in a given “song” (although it took less than a day for Girl Talk fans to post nearly each one on Wikipedia). Gillis uses on average at least 12 samples in a given track, although Illegal Art says the album was “intended to be listened to whole” but segmented into separate tracks to make navigating it easier. That’s actually sound advice because, although you might not like the beginning of “Jump On Stage” (featuring Big Boi rapping over Portishead’s “Sour Times”) and decide to skip to the next track, you would have missed Ol’ Dirty Bastard rapping over Radiohead’s “Creep.” And for what? Just to arrive at a random location in the mix with a broken sense of context.

That warning not to jump around especially applies to All Day, which seems to take its time a little more than previous Girl Talk releases. No song on Feed The Animals broke the five-minute mark, but only three of the 12 songs on All Day clock in under five minutes. That comes across in opener “Oh No,” which begins with Eminem, Ludacris and Jay-Z over more than two solid minutes of Black Sabbath’s “War Pigs.” That seems like a long time for Gillis to hang onto one sample. That’s just one example of what seems a little like a conscious effort to work with one primary sample as a backbone longer than usual, which makes for a more user-friendly experience. Not only is there more room to breathe, but Gillis also doesn’t do a lot of teasing on All Day. Instead of giving you just a few fleeting, unresolved seconds with your favorite song, you might get both a verse and a chorus (and if you like Toadies’ “Possum Kingdom,” you’re in luck).

As for the actual sample choices, as always, Gillis has the ability to find samples that evoke a ’90s flashback (Spacehog, Beck) and breathing new life into them in a way that keeps the integrity of the originals. He also unearths the hidden beauty in places you probably never would’ve looked (Miley Cyrus, Ke$ha). But the real enjoyment of any Girl Talk album stems from picking out the first hint of a song, mentally scanning your iTunes and figuring out what it is in time to fully enjoy it before it’s gone. Or, you could also just stop thinking and enjoy all of it.