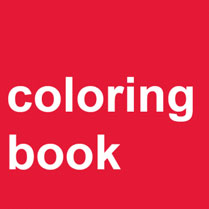 Glassjaw's latest reinvention could leave a mass murder of puns in its wake, but something about coloring outside the lines seems to fit best. The band's latest offering of new creations, which arrives just a month after the digital singles collection Our Color Green is a stunning departure from that EP's often razor-sharp, chaotic aggression and scathing hooks. The Coloring Book EP, given exclusively to attendees of the band's current headlining tour, is barely comparable: often heavily, experimentally pulsing, sometimes stunningly subdued. It's the type of material the band's more mookish sect might describe as “really chill, bro” if that didn't undersell just how flagrantly tense this EP can get.

While this progression probably isn't all that abrupt given how far back some of the songs on Our Color Green dated (“Natural Born Farmer” was in their Warped Tour 2003 set), it's still mesmerizing to hear just how different these tracks really are. While Deftones have always been a hovering influence on Glassjaw's more brooding tendencies, here it's greater than usual: They're deconstructing that band's shoegazey base for something uglier, more vividly craggy and abrasive.

A menacing, throttled grumble of baritone guitar from Justin Beck ushers in opener “Black Nurse” alongside frontman Daryl Palumbo's demented puppy barks; even with a metallic dub feel to the verses and a gritty, frenetic atmosphere, it's perhaps the EP's most straightforward track. “Gold,” initially released last month on the band’s website, is the perfect gateway to their new sound. Palumbo sounds more vulnerable and yet mature than ever (“Still I say, please don't let me down… How long before I breathe you out?”), and the foundation below him rumbles stealthily to push the near-five-minute track along. “Vanilla Poltergeist Snake” has something relatively new: a bleating, grinding organ tone that recalls One Day As A Lion's “If You Fear Dying” and the Blood Brothers' “Cecilia And The Silhouette Saloon.”

After the darker, sinister oscillations of “Miracles In Inches” comes the EP's longest and most gripping track, the seven-minute “Stations Of The New Cross.” Capitalizing on the spacier, more tender aspects of 2002's Worship And Tribute, a variety of percussive instruments clacking in the background as a strong, rhythmic undercurrent holds back the tension from unraveling completely before white noise ocean waves and a rapid bass pulse carry it out. Closer “Daytona White” is a great collision of everything new in this band's peculiar stage: Beck's noisy, lumbering guitar, Palumbo's ruminating reservations, and an intricately introspective cogitation that suddenly just ends, leaving one wanting more in the best way.

Coloring Book assuredly turns the tables on what fans might have come to expect from Glassjaw's potential third full-length. But whatever may come of it, it should prove to be a welcome chapter in a book consistently and bafflingly torn up, rewritten, drawn out and reconfigured by one of post-whatever's most mysterious and surprising acts.

“Stations Of The New Cross”