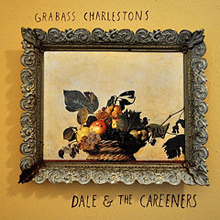 More than a deecade into the career of veteran punks Grabass Charlestons, who would have expected the band to undergo such a noticeable stylistic transformation? Where the Gainesville, Florida, act used to boast a sometimes forgettable but occasionally spirited punk sound often likened to Dillinger Four or a speedier Leatherface, their third full-length, Dale & The Careeners is slower, steadier and more deliberate, with stronger hints of Americana rock-leaning acts like the Hold Steady and Red Collar. The album's been described as a conceptual narrative of sorts, but it's such a noticeable evolution, the concept might be that the Grabass Charlestons are playing as a fresh act dubbed Dale & the Careeners. Even now, though, Grabass are working best when they churn out home-fried, bash-away melodies, like with opener “Stormy Weather,” “If Dale Were You” and the compelling mid-tempo strain of “Apocalypse Whenever.” While “Existential Dale” offers something a little slower, the pacing and vibe of these 12 tracks are actually way too consistent. This record finds a shuffling groove, with every song running the same kind of vibe, and plows into it deeply. It's nice to hear a long-running punk band with a moderate following change it up quite a bit, but adding some variety to their new sound certainly wouldn't hurt either.

“If Dale Were You”