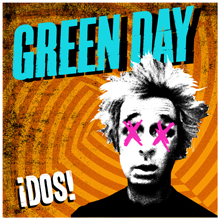 With ¡Uno!, Green Day reminded the world that despite two albums' worth of rock operas, they can still be a pretty kick-ass punk band when they want to. With ¡Dos!, Green Day are more focused on going back in time past their punk-rock roots into the world of garage rock, with elements of everyone from the Stooges to the Monkees showing up throughout its 13 tracks (not to mention many of the “return of the rock” class of the early 2000s such as the Hives, the Strokes and the White Stripes). Now, you might say to yourself, “Didn't Green Day already sort of do this with Foxboro Hot Tubs?” And the answer to that is, “Yes, they did, but ¡Dos! is way, way, way better than that record.”

The album is bookended with two delicate solo numbers, “See You Tonight” and “Amy,” the latter being a tribute to fallen singer Amy Winehouse and sounding like something Elvis Costello left off My Aim Is True. These are the only subdued moments of the otherwise noisy, rollicking affair, which contains only two missteps, “Fuck Time” and “Nightlife.” The former is a song about fucking that has no chance of actually inspiring anyone to fuck, and the latter is the trio's attempt at producing a Gorillaz-esque dub/hip-hop track that falls flat on its face, mainly due to the rapping from previously unknown female MC Lady Cobra, with cringe-inducing verses such as, “Cheap champagne on an even cheaper suit/Hope there's more in your pants than a bus route.” Like, that's an actual rhyme. It's a truly dreadful song, and one of the worst Green Day have ever released. However, points must be awarded for attempting something so out of the box, especially considering the rest of the record is so focused and straightforward.

The highlights are many, though: “Ashley” is a ripping punk number with a reference to crystal meth, Billie Joe Armstrong doing his best sneer and one hell of hook. “Stop When The Red Lights Flash” could've come from Insomniac, with a thick riff and “I'll make you surrender” earworm of a chorus, all accented by ’60s-rock “ooh”s. “Baby Eyes” starts off angry as hell before segueing into a sticky-sweet pop-punk number with a solid “whoa-oh” chorus. “Wild One” slows the album down a tick—it's not a power ballad, but more of Green Day's interpretation of Coldplay's “Yellow.” Chunky, major-key chord progressions and smooth vocal harmonies at a crawling tempo make you rock back and forth instead of jump up and down, but it's a welcome change. “Stray Heart,” the album's best song, is a bouncy, jangly pop number that is heartfelt and fun—the song structure might not be anything close to original, but it's what they do inside it that makes the song resonate.

Some songs' lyrics feel a bit too rote (“Makeout Party,” “Lazy Bones”) but that's when you realize Green Day never really had all that much to say in the first place, and they function at their best with hook-filled songs that are typically three minutes or less. Luckily for us, ¡Dos! is full of those tracks, and is definitely the highlight of the band's ongoing trilogy to date.