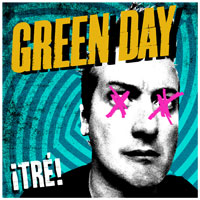 This review originally ran in AP 294.

By this point, everyone should realize Billie Joe Armstrong’s admission into rehab in mid-September was not a publicity stunt: Green Day’s touring schedule has been postponed indefinitely, ¡Dos! was released in November with minimal press to back it up and ¡Tré! had to be bumped up from its original January 2013 release date to try and keep the band’s momentum moving while Armstrong was out of the spotlight. It is easy to dig through all three of Green Day’s new albums to look for clues regarding Armstrong’s alleged drug habit (odds are, you found some on ¡Dos!), but ¡Tré! is the cleanest, soberest record out of the trilogy. As such, it feels more like leftovers from the first two albums than its own cohesive work.

The album opens with “Brutal Love,” a ’60s-esque soul song that is practically a straight knockoff of Sam Cooke’s “Bring It On Home To Me,” albeit with louder guitars and a really sexy horn section. It feels like the morning after the wild New Year’s Eve party that was ¡Dos!, and it gently eases you into the rest of the record. “Missing You” is a solid follow-up, carrying a Nimrod-era pop-punk vibe. The chorus of “I’m missing you/I’m missing you/You’re not around and I’m a complete disaster/I’m missing you” isn’t exactly going to win Armstrong any Pulitzers, but the sincerity with which he delivers his lovelorn message is moving.

Sadly, it’s one of the few times ¡Tré! feels energetic and interesting. “8th Avenue Serenade” sounds like an outtake from Warning; “Drama Queen” is a plodding acoustic number that would put an insomniac to sleep; the closing track “The Forgotten” is Armstrong’s full-fledged attempt at being John Lennon, but the sappy piano ballad is one of the limpest things the trio have ever recorded, better suited for Elton John than punk-rock royalty.

But that’s kind of the point: Green Day’s recorded catalog sits somewhere around 200 songs, and that breadth includes everything from sloppy covers of ska-core classics to nine-minute rock-opera suites. So why the fuck not write a piano ballad? Or a fun, if way-late-to-the-party tribute to the Occupy movement (“99 Revolutions”)? Or another multi-part punk-rock suite that’s a blast to listen to, even though it has absolutely no context (“Dirty Rotten Bastards”)? Or another Nimrod-esque mid-tempo pop-punk number with bassist Mike Dirnt inexplicably singing lead for exactly 10 seconds (“Sex, Drugs & Violence”)? ¡Tré! feels scattershot and slapped together, making it difficult to enjoy on its own merits. There are definitely songs worth cherry-picking to add to your mega-mix of your favorite Green Day songs from this recent trilogy (“X-Kid,” “Little Boy Named Train” and “Amanda” are our endorsements). But it’s unlikely you’ll find yourself wanting to listen to ¡Tré! on any sort of consistent basis.