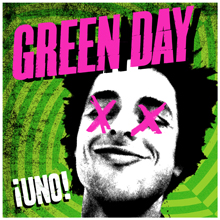 Here’s the thing about Green Day: They’re at the point in their career where they can legitimately do whatever they want. They’ve sold 70 million albums worldwide and played to nearly as many in their 25-year career. Hell, it’s practically a given that they’ll be a first-ballot inductee for the Rock And Roll Hall Of Fame in 2013, their first official year of eligibility. The amount of times this band have faded into the darkness only to blast back into relevancy is staggering, and that’s why we really shouldn’t be surprised that for the trio’s first new music in nearly three-and-a-half years is the first part of a trilogy yet has no heady concept tied to it, unlike 2004’s American Idiot or 2009’s 21st Century Breakdown. Instead, ¡Uno! does what Green Day have always done best: play loud, fast, catchy-as-fuck punk rock that results in near-endless replay value.

The first thing to take away from ¡Uno! is that it shares little in common with its more rock-opera-esque predecessors. Most songs are stripped down to strictly guitar/bass/drums, with a minimum of excess multitracking, auxiliary percussion or guitar solos. More importantly, this album is fun. A song as simple as “Fell For You” seems to adhere to the same Ramones-esque formula New Found Glory tried on last year’s Radiosurgery. “Loss Of Control” features some pretty pointed lyrics from Billie Joe Armstrong railing against what sure seems like the punk scene (“I wanna find me a better scene where it’s not the same opinion/I’d rather go to a funeral than into this high school reunion”); the song could’ve fit nicely on Insomniac, as could have the disc’s standout track, “Let Yourself Go.” It’s the fastest song on ¡Uno!, breaking 200 bpms and creating an instant sing-along with perfectly placed profanity. It’s destined to become a live staple.

Having spent the past two albums railing against the government, it’s nice to see Armstrong’s lyrics focusing more inward, with numerous songs about the most basic (yet deceptively complex) of human emotions: love. Take “Fell For You,” with its easily relatable chorus of “Had a dream that I kissed your lips/And it felt so true/Then I woke up as a nervous wreck/And I fell for you.” With the stripped down instrumentation comes more direct lyrics, and it’s mutually beneficial.

Seeing as how the band are putting out three albums’ worth of material over the next four months, it’s safe to figure at least a few songs on each record are less than essential. In ¡Uno!’s case, it’s “Carpe Diem” and “Kill The DJ.” The former has a solid musical base that will make you hear the Clash’s “I Fought The Law,” but its chorus (“Carpe diem, our battle cry/Are we all too young to die”) feels empty, and makes you remember the band already wrote this song about seven or eight times already on the past two albums. As for “Kill The DJ,” well, it’s a bit of a novelty single, though nowhere near as offensive as, say, “Cruisin’ California (Bumpin’ In My Trunk).” Green Day have never shied away from new genres, but this Franz Ferdinand-aping dance-rock beat has been played out for years now, and it’s not like the lyrics are delivering any groundbreaking message (“Someone kill the DJ/Shoot the fucker down”).

Still, the miscues are few throughout its 42-minute runtime, and the amount of moments that will make longtime Green Day fans’ ears perk up as they hear callbacks to the band’s ’90s heyday is large. But what’s truly promising is buried near the end of the album. The pair of “Sweet 16” and “Rusty James” both feel like the kind of songs Green Day were writing in their Warning era: unpretentious jangle punk that wasn’t attempting to impress anyone, played by three guys quietly mastering their craft. It gives hope that for as enjoyable as ¡Uno! is, what’s yet to come is even better.