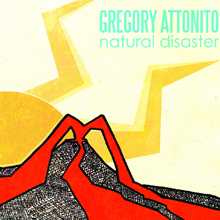 The great luxury of being a punk-rock elder statesman whose primary band run their own DIY label means you can pretty much do what you like creatively. For Bouncing Souls frontman Greg Attonito, at the present moment that indulgence is mellowing out with an acoustic guitar and embracing his softer side. Because Attonito has one of the most identifiable voices in punk rock, there’s no mistaking the vocals on Natural Disaster; otherwise, the record is a long way from anything Bouncing Souls fans would recognize—and in some spots, a little of that band’s energy would go a long way. The songs are almost lullabies, and depending on when and where you listen, snoozing may follow.

What’s both good and bad about Natural Disaster is its simplicity; the arrangements are elegantly bare, with mostly just acoustic guitar, some scattered horns, synths, slide guitar (a win on “Sexiest Girl”) and Attonito’s charismatic vocals. Some tracks become a tad repetitive, between their basic chord progressions and sparse lyrical content, so it almost sounds as if Attonito is jamming ideas rather than presenting tight, well-honed songs. “Volcano” is one exception of note, where a winning hook is recognized and emphasized, resulting in the most memorable performance on the collection. It’s an improved contrast between tracks such as “Sexiest Girl,” which may be emotionally and personally honest, but isn’t necessarily executed with a high degree of prowess or eloquence. The moments when he does nail it, like the sharp-picked change in “How Many Songs,” illustrate what’s possible.

Expression is essential to the artist, and for the members of a veteran outfit like Bouncing Souls, it must be a true pleasure to branch out, like Attonito has with Natural Disaster. However, the EP suffers from some uneven songwriting and a lack of tonal dynamics, and it seems a far cry from Attonito’s punkier efforts, so it’s not even a sure thing for Souls fans. You’ll need to take a nap after this—we recommend cranking Hopeless Romantic to wake up.