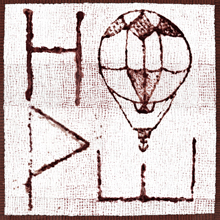 The independent life seems to suit Hawthorne Heights well. After nearly a decade of time spent on labels, the group have exercised their liberties as free agents, undertaking a three-EP series completely funded and released on their own dime. While last year’s Hate found the band exploring their angst-fueled hardcore roots, Hope dials the frustration back a bit, opting for a more melodic sound. The title track might be the most optimistic song of the band’s career; the song is an unabashedly poppy number featuring one of the group’s best hooks. “It always guides me home/Hope, it’s our favorite song when the tour is way too long/All I have is hope,” sings JT Woodruff, and it’s an empowering bend-but-not-break statement from a singer who’s experienced plenty of personal and professional heartbreaks.

Of course, the band haven’t completely lost their edge. “Stranded” bubbles with a palpable sense of energy, while “New Winter” features plenty of screamed background vocals over a pounding drum beat and earworm chorus (plus an adorable cameo from Woodruff’s daughter, Avery). In some ways, Hope is the perfect blend of the band’s more muscular old material and the pop sensibilities they fully developed on later releases like Skeletons—with a little rough-around-the-edges charm to make the DIY project endearing. Even though there’s a misstep or two present (like its predecessor, “There Was A Kid (Part 2)” winds up being a skip track), Hope is loaded with enough strong material to keep Hawthorne Heights on the road, right where they belong.