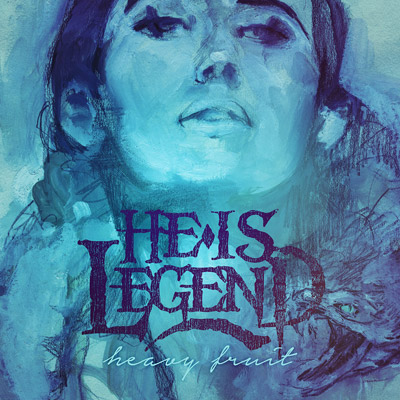 First, there was the return from the full-stop hiatus. Now, with Heavy Fruit, comes He Is Legend’s return from their studio hiatus, as it were. The Wilmington, North Carolina, outfit have been kicking tires around small pockets of the touring circuit since coming back from a self-imposed two-year break in 2009. It’s only now that the quartet are foisting the fruits of their slow-cooked labor onto the public; a public that, if past Billboard chart placements and the enthusiastic reaction at 2014’s South by So What?! festival are any indication, has been wishing for a while that they’d hurry the fuck up with the new goods already.

Heavy Fruit starts with “No Visitors,” which is microcosmically indicative of the macrocosm that is the album. The song takes the band’s brand of fire-roasted metalcore and Ping-Pongs it between speedy, heads-down, mosh pit-ready aggression and massive, melodic spaciousness that, in a just world, would be a staple of classic rock playlists come the year 2046. Front man Schuylar Croom tops it off with the Southern beard-rock version of good-cop/bad-cop vocals as he showcases his improved ability to stay in key and croon while offering a little gristle around the edges of his clean voice and some James Hetfield-like oomph to his dirty snarl. Croom’s performance is half space-cadet passion and half ballsy finger-pointing, though some of the high school level poetry of the lyrics in “Miserable Company” and “I Sleep Just Fine” aren’t going to prevent any uncomfortably cringing.

Tons of positive, kinetic energy gets expended on the likes of “This Will Never Work,” which rams the sardonic groove of Every Time I Die down the throat of ’70s hillbilly sleaze-rockers Black Oak Arkansas. There’s not a moment on “ABRACADABRA” that doesn’t scream ‘ANTHEM!’ and “Spout Mouth” is all big, dumb, radio-rock fun. However, as alluded to on “No Visitors,” Heavy Fruit possesses myriad textures and colors and you can hear the band still finding their directional bearings when they take the foot off the gas on “Bethozart” and “Time To Stain,” but they do exhibit noticeable maturity during the effervescent shifts of “Something, Something, Something Witchy.”

This whole Southern rock/metalcore mélange has never had a solid blueprint to work off of. Thusly, unabashed purveyors and de facto leaders like He Is Legend are bound to encounter missteps as they continue to carve out a sonic spot for both themselves and listeners. Heavy Fruit may be testament to that, but it’s definitely not an uninteresting listen.

“This Will Never Work”