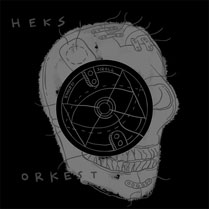 Combining veterans of Engine Down, Sleepytime Trio, Action Patrol, Holy Rollers, Avail and Grip, Heks Orkest are something of a Virginian ’90s post-hardcore supergroup, a flashback to the basement-dwelling, Fugazi-worshiping punk bands of yore. From Gravity Records in southern California to Gern Blandsten in the Garden State, scores of kids stole the angrier parts of Drive Like Jehu and Hoover to create an unhinged racket. Heks Orkest fit firmly in this tradition. On this two-song EP (released by AP music editor Scott Heisel's Youth Conspiracy Records), they lace swinging tempos with lacerated guitars and temper-tantrum vocals. The results might not be pretty, but they are always thrilling.

Though Heks Orkest use their old bands as a starting point, they have no desire to rehash the past. Credit vocalist David Grant for incorporating just enough melody to distance the band from the atonal squalls of yesteryear. Keeley Davis and Cam DiNunzio’s tag-team guitar battle revels in feedback and noise, particularly in the petulant, appropriately titled “Tinnitus Festival.” Yet their unusual guitar patterns are best heard on the throttling “Endless Scroll For Piano Player.” The streamlined and in-your-face pace make the songs more Swing Kids and less Crown Hate Ruin.

Critics might hastily write off Heks Orkest as a negligible exercise in nostalgia. Yet these two songs demonstrate that the elders still have a thing or two to teach the youth. Endless Scroll offers a tantalizing taste of what will hopefully follow.