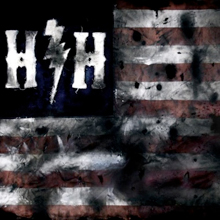 As a title, Begin Again has taken on somewhat of a double meaning. At first, it symbolized the moving on, through this new outfit, of Atreyu drummer/vocalist Brandon Saller, after that band announced their hiatus at the start of 2011. Now, it stands more for the rebirth of that new outfit, as Hell Or Highwater reissue their debut full-length on a new label with three bonus tracks. A strange mix of styles and genres, it flits between hard rock, classic rock and stadium rock—often in the same song (listen to opener “Gimme Love” or “Tragedy”, which combines classic AOR with metal undertones). While the sentimental chug of “Rocky Water’s Edge” tugs at the right heartstrings, “When The Morning Comes”—more akin to Shinedown than anything Atreyu ever released—misses them. Avenged Sevenfold’s M. Shadows makes an appearance on the murderous, toe-tapping “Go Alone,” the album's best moment. Oddly, the bonus tracks—a remix of “Tragedy”, a high-octane recasting of Simon & Garfunkel’s “The Boxer” and hard-nosed original “Pretty Penny”—are detrimental to the overall impact of the album, but skip them and this remains a solid, if slightly confused, debut offering.