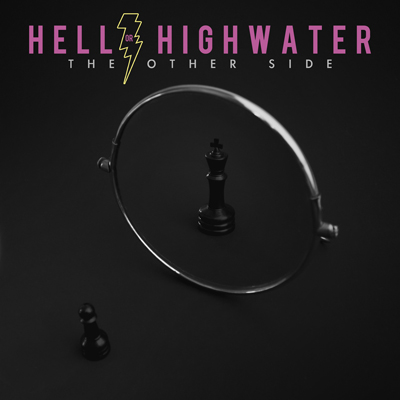 Having only dropped their debut full-length in February, Hell Or Highwater have wasted no time in following it up with this 5-track EP. However, these aren’t inferior tracks that failed make the cut. While Begin Again was a great though patchy collection, every track here is killer in its own way. Bubbling with personality, massive hooks and undeniable warmth, the band—fronted by Atreyu’s Brandon Saller—bring arena rock, ‘80s/’90s metal influences and even some Americana to the party. And it’s a fine time for all concerned.

Kicking things off with “Moment Of Clarity,” it’s no slight to say that at times it’s easy to believe you’re listening to Avenged Sevenfold, also the case for the single “Wrong.” Both tracks wield meaty, lurching riffs, moments of sinister contemplation, titanic choruses and solos that wouldn’t seem out of place on a Bon Jovi record—and they’re straight-up fun. The punchy strains of “The Other Side” injects a little country flavor, and should be featured in a movie, soundtracking a character hitting the road for greater things to come. Then there’s mid-tempo über anthem “Remember The Life And Not The Death,” makes it impossible to avoid visualizing Bill & Ted rocking the planet with its widescreen chorus and howling leads. “Drowning In The Waves” is no slouch in this department, either. Starting out with layered, Ebowed guitar sounds that could have been wrought from bagpipes (yep, really) it offsets the swagger with perhaps the band’s most triumphant choruses. It even takes a moment to shift into full-blown drunken Irish folk. If that doesn’t put a smile on your face, you’re made of stone.

At heart this is pretension-free, good-time music. Part of its appeal is in its unabashed embrace of the spirit driving the biggest of rock anthems. You have to admire them for managing to emulate their forebears without sounding dated. Still, if they ever make it to the stadiums suited to their sounds it would be a shame to witness a sea of cell phones held aloft rather than lighters.

Drowning In The Waves