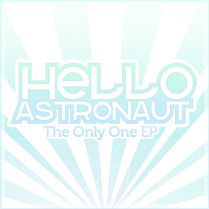 The Only One EP

Proving once again you need neither an actual band nor a record label these days, Hello Astronaut is the nom de plume of 18-year-old multi-instrumentalist Jordan Palmer, and The Only One, his second release, is a confident, richly melodic and heartfelt affair. Palmer has progressed dramatically since 2009’s Paper! Snow! A Ghost! EP, which was a distinctly bedroom lo-fi affair full of acoustic guitar, piano, bleeping analog synths and Auto-Tuned vocals. This time around, his songs get the full-band treatment, and it’s an altogether more rocking affair with big, clean production really pushing everything to the fore. In making this leap he has inevitably lost some of the intimate charm that suffused the previous release, but he has compensated for this in stronger songwriting and lush arrangements.

The Only One’s sound embraces the dynamic hooks of Dashboard Confessional and the nostalgic undertones of Cute Is What We Aim For, or even Sweden’s the Last Days Of April. At times, it becomes a little too saccharine for its own good—as on the chorus of the Jack Johnson-esque “Say Goodbye”—but it doesn’t detract from the fact that this the kind of album sure to burst thousands of teenage hearts. Über-catchy opener “The Best She’ll Ever Get” is the kind of song that demands to be played in a big open space, and closer “So Unpredictable” is radio-rock nirvana, giving a damn good tug on the heartstrings. If anything is holding Palmer back it’s that he doesn’t really stick out from the crowd in any notable way, and every track invites comparison with other artists. But this isn’t to say he doesn’t have potential, and The Only One could very well be a stepping stone to far greater things.