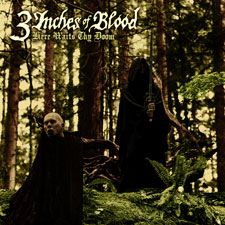 3 Inches Of Blood haven't changed their lyrical perspective on their fourth full-length (and first for Century Media); they're still yammering on about battles and demons and blah blah blah. But their musical approach has changed quite a bit. While Slipknot's Joey Jordison produced 2007's Fire Up The Blades, this album is shepherded by Jack Endino, who's given 3IOB a much more rock 'n' roll feel. The riffs have all the precision of metal, but they're executed with punk energy. Drummer Ash Pearson has more of a groove than he's displayed on previous albums, while vocalist Cam Pipes' shrieks are reminiscent of Accept frontdwarf Udo Dirkschneider. The total effect is not so much retro as classicist; these guys know what's great about metal (hint: NWOBHM), and feel no need to hide their love for it.