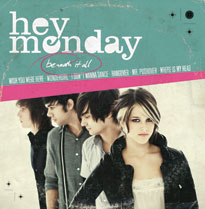 Beneath It All EP

Originally intended to be an eight-song full-length, Beneath It All, the second album from Floridian rockers Hey Monday, was recently downsized into a six-song EP. Despite losing 25 percent of the tracklisting, the group are still able to fit a wide range of songs into the mix. There’s an upbeat clap-along filled with synths (“I Don’t Wanna Dance”), a down-tempo breakup ballad (“Hangover”) and an airy rock anthem (“Where Is My Head”). Beneath It All comes off as extremely over-produced, with swooshes, bells and whistles lending themselves better to Kelly Clarkson than Hey Monday. That said, “Wondergirl” shows what the group are capable of, with a sweeping chorus and a bridge (“But I can’t compete with these addictions that you made/Now every touch becomes the enemy”) that lends itself to artists twice their age. Beneath It All is enjoyable enough, but it feels woefully incomplete.