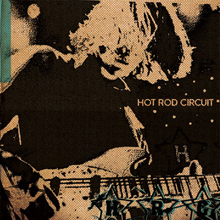 For their first release since 2007's criminally underrated The Underground Is A Dying Breed (and the first release with their “classic” lineup since 2002's Sorry About Tomorrow), second-wave emo unit Hot Rod Circuit don't try to fix what ain't broke. This self-titled EP's lead track, “Forgive Me,” is a smooth, melodic rocker with a healthy dose of twang from guitarist Casey Prestwood. The melancholy vibe of the music and Andy Jackson's broken-hearted yet surprisingly mature lyrics (“It's time for me to be/The best that I can be/Things won't stay the same/'Cause I need to make this change/I'm content and I'm finally letting go”) make the song sound like a Dying Breed outtake—and that's meant to be a compliment, as we're firm believers in that record being HRC's best. “Into The Sun” is a bit more aggressive from the start, with a slower tempo, octave-jumping guitars and a methodical, propulsive rhythm section of bassist Jay Russell and drummer Mike Poorman. The song really hits its stride in its second verse, as Jackson belts, “I won't ever let this stop/I'll be right here right by your side/I won't ever let you be the one that got away,” and longtime fans of the band will be convinced they're listening to HRC a decade ago. The EP concludes with a rather perfunctory cover of Superdrag's modern power-pop classic “Sucked Out.” HRC's version doesn't do anything innovative with the track, instead unnecessarily simplifying the arrangement (specifically in the drums). It just goes to show that a great band can cover a great song and not end up with a great result. Still, the two original songs on this EP are promising reminders of Hot Rod Circuit's strengths—now, to see if the band can cobble together a cohesive full-length before riding off into the sunset once more.