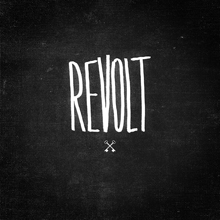 On first exposure, the five tracks of Revolt appear to be solid if unspectacular additions to Hundredth’s arsenal. Aggressive, chunky and in your face, they seem very much a continuation of where the band left off with 2011’s dynamic Let Go, encapsulating the variety within the their uncompromising hardcore sound without progressing as such. However, the more you put into the record the more you get back, and it soon reveals itself to be far and away the most potent music the South Carolina quintet have put their name to.

Kicking things off with the angular charge of “Ruin,” anger runs rampant, chords crashing and colliding over bursts of staccato drumming before it opens up into a massive section that is somehow even more sinister than what has preceded it. By comparison “Free Mind / Open Spirit” seems almost upbeat, despite its mean as hell chugging and air of desperation, while the despondent trudge of “Barren” is moody, choking back the overt fury that elsewhere consumes them. Better still is closer “Euclid (Slave Song)” which sees Hundredth inject more melody into proceedings while maintaining the intensity of that which has come before it, and it is perhaps the best example of how the band are evolving. However, this too is bested by “Savages,” which blends airs of confusion, hopelessness and melancholy with its hostility. All of the songs are enlivened by Chadwick Johnson’s willingness to shred his larynx, “Savages” in particular, which at one point is scaled back to just a solo guitar strum while he screams from somewhere in the distance, desperate to be heard—and in the process providing the record with its defining moment.

If this EP is any indication of where the band are headed on their next full-length then hardcore fans have a great deal to be happy about. Equally, if this for some reason turned out to be their swan song—and let’s hope not—it would be a damn fine way to go out, making sure the name Hundredth stuck around for all the right reasons.