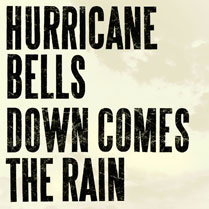 Down Comes The Rain EP

Surely Steve Schiltz had no inkling that his solo studio endeavor would rocket to success thanks to a bazillion-dollar teenage-vampire franchise. It was probably even more surprising that a throwaway track called “Monsters,” found on the soundtrack to The Twilight Saga: New Moon, propelled his popularity. Hurricane Bells’ 2009 debut, Tonight Is The Ghost, showcased Schiltz’s talents as a multi-instrumentalist and songwriter. While not too dissimilar from his work with his day job, the shoegaze-leaning Longwave, Schiltz’s solo stint revealed a darker core.

Schiltz continues to wear all of the hats on follow-up EP Down Comes The Rain. Two new songs—“The Deep End” and “The Waiting Song”—perfect his formula. The former rumbles sweetly like a long lost cousin of anything off the Cure’s Disintegration; the latter wades in waves of shimmering guitars and pleading vocals. Though often miscast as dour as the film that brought him notoriety, Schiltz’s new songs shine with a bright sound and hopeful lyrics.

Down Comes The Rainalso includes three cover songs. Curiously, Schiltz chose to reinterpret two recent artists (East River Pipe’s “Make A Deal With The City” and Blue October’s “Into The Ocean”). Yet it’s his plaintive rendition of the Shirelles’ R&B standard “Will You Love Me Tomorrow” that steals this short show. The duet with Scout vocalist Ashen Keilyn elevates the song beyond a mere cover. Their intertwined voices combined with sparing acoustic guitar create an air of longing that clearly mirrors the desperate tone of the lyrics. Schiltz would be wise to get a little help from his friend on future recordings.

“Will You Love Me Tomorrow”