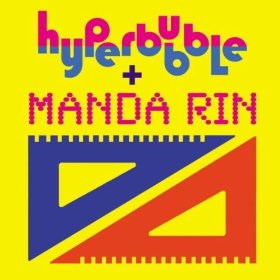 Fans of ’90s indie-pop may remember Manda Rin as the fizzy, extra-effervescent frontwoman from Scottish trio Bis. Here, Rin has teamed up with Texas techno-pop duo Jess and Jeff DeCuir—aka Hyperbubble—for a six-song mini-LP that feels like videogame soundtracks, kooky ’80s new-wave kitsch, thoroughly modern 8-bit sparkles and synth-laden Saturday morning cartoon themes all mashed into the sonic equivalent of a truck full of Twizzlers. Pretty neat, huh? Nope: It’s patently fucking annoying, from the rote-sounding settings on the DeCuir’s synthesizer arsenal to Rin’s peachy-keen vocal delivery (“Hello Heaven Operator,” “In The Movies”) which sounds more coot than cute. (By comparison, Jess DeCuir’s vocal on “Kamikaze Coma” sounds positively contemporary.) What’s totally worth the time investment is the urgent synth-workout instrumental “Attack Of The 3-D Space Kittens,” which sounds like Does It Offend You, Yeah? holding a rave in a candy store where processed sugar is the drug of choice. (The song also works as a great companion to DIYY’s “Attack Of The 60-Foot Lesbian Octopus”) It’s amazing how something that would’ve been deemed “awesome,” say, 15 years ago (when Rin was belting out the theme for Cartoon Network’s beloved franchise The Powerpuff Girls), is as awful as brushing your teeth and rinsing with a two-liter bottle of Mountain Dew. If the EP is supposed to be ironic, it doesn’t let you in on the joke; if the intent is supposed to be frantic like a pre-pubescent sugar rush, it’s too clever by half. Maybe that’s why Hyperbubble + Manda Rin is an EP: nostalgia, like sugar is best consumed in small doses. (P.S.: The back cover has Rin and the DeCuirs holding cats—which is why this reviewer bumped the rating up an additional star.)

“Attack Of The 3-D Space Kittens”