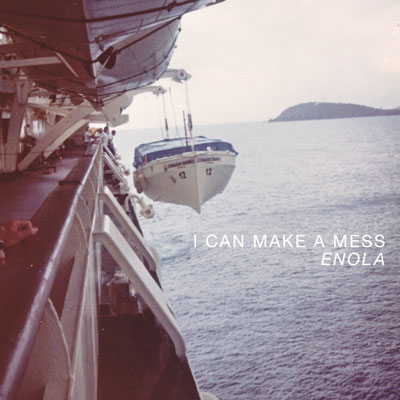 I Can Make A Mess

With four Early November albums, two as Ace Enders & A Million Different People, plus the three previous releases from I Can Make A Mess Like Nobody’s Business, Ace Enders has earned his stripes as a talented and diverse songwriter. Enola continues that diversity, as the album gets off to a subdued start, at times sounding more indie folk than pop-rock. (“Adaption Cell” sounds straight off an Iron & Wine album.) Even when the instruments are more prominent (the chorus of “Wrinkle”), the arrangements are fairly simple, allowing Enders’ voice to carry through. Things pick up with “Listen Lesson/Keep Away” which sees Enders reaching for a higher octave while giving his music a new, but surprisingly fitting infusion of electronics. The strongest track is “Lions,” which alternates between quiet acoustic verses and quick-paced choruses complete with strings. The one criticism of Enola is its lack of cohesiveness. Often it sounds like Enders had enough ideas to make three albums, but instead he threw them all on one. Enders’ gift—and possibly his curse—is that he never wants to get too comfortable with his music. Fortunately on Enola, he succeeds more often than not.