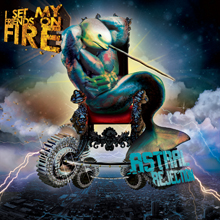 I Set My Friends On Fire

The second song on I Set My Friends On Fire’s sophomore (and sophomoric) album is called “Infinite Suck.” As they say in Hollywood, the joke writes itself. The duo of Matt Mehana and Nabil Moo is now the duo of Mehana and Chris Lent, with production assistance from Travis Richter of the Human Abstract. The music is as annoying as ever, mixing the worst qualities of Brokencyde, I See Stars and Agoraphobic Nosebleed into one swirling blend of cheesy rave synths, ultra-affected “extreme” vocals, talentless guitar mangling, ultra-primitive drum programming and song titles that probably seemed funny at the time (“My Paralyzed Brother Taps His Foot To This Beat,” “Life Hertz,” “Erectangles”). It’s hard to decide which is the album’s worst quality—Mehana’s scratchy-throated “extreme” vocals or his lame, off-key attempts to sing cleanly. Maybe it’s neither of those things; maybe it’s the lyrics.

At least there aren’t any lame hip-hop covers on Astral Rejection—the group’s debut, 2008’s You Can’t Spell Slaughter Without Laughter, featured their “hilarious” take on Soulja Boy’s “Crank Dat.” That’s a tiny, tiny plus. There are one or two moments on Astral Rejection that are briefly and superficially entertaining, in exactly the way drinking a bottle of Jolt Cola instead of eating lunch is temporarily satisfying. But both leave you with an empty, gurgling pain in your guts and the feeling that you made a very poor decision.