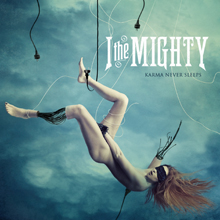 Karma Never Sleeps is the third EP in five years by San Francisco’s I The Mighty, but they’ve yet to release a full-length. That would be more telling if the quartet didn’t fashion well-crafted arrangements, sporting everything from  a dynamic blend of emo and metal with prog expansiveness and bombastic breakdowns around moments of understated delicacy. Frontman Brent Walsh really drives the proceedings with his lithe, impassioned tenor, sitting high in the mix and running through the songs like a narrator. (Thanks to the wonders of multi-tracking, he doesn’t have to sneak a breath.) Yet for all its outsized ambition and brooding sentiments, Karma Never Sleeps isn’t as overwrought and pretentious as it might sound. Walsh is backed by some fine players, notably guitarist Ian Pedigo, who provides plenty of accents surfing the rhythmic swells and skating serpentine under the verses without distracting from the vocals.

There are two main problems with this otherwise pretty solid effort. First, the songs tend to follow a similar course of build/release scripted like a Law & Order episode, where the clifffhangers and resolutions are keyed to the commercial breaks, down to the predictable breakdowns lifted straight out of 2005. This is exacerbated by the fact it’s only six songs—not enough room to spice the album with a couple more offbeat tracks. The other issue is more subtle; the production’s just too clean and pressed, lacking warmth and life. At times, the drums sound thin and sapped of energy. Though the playing’s generally sharp enough to overlook it, the overly crisp, rather trebly tone is problematic throughout.

Fortunately, the songs themselves are pretty good, and while Walsh is undoubtedly a little melodramatic, he has the pipes and charisma to pull it off. Just as Karma’s title suggests a reckoning, the subject matter tends to fit young peoples’ questions of identity and place. The catchy “Dancing On A Tightrope” counsels resilience to someone “desperate to find someone to ease that flurried mind when no one’s listening.” They alternate lulling ambient soundscapes and crushing guitar on the politically tinged “Escalators,” while Walsh bitterly bites, “You’re so deserving of the place you’re in, escalating down in rows.” “Cutting Room Floor” rages against greed and selfishness as Walsh nimbly jumps between his natural voice and falsetto, and the guitars deliver some of their crunchiest riffs.

Karma Never Sleeps is more polished and better written than I The Mighty’s first two releases, showcasing a band with strong chops and solid melodies. Though their eyes are bigger than what they’re able to pull off arrangement-wise, the band seem ready to remove the training wheels and take a shot at their full-length debut. There’s certainly no guarantee of its quality, but there’s enough evidence in Karma to suggest with some choice editing and better production they could make something great. They’re just not there yet.