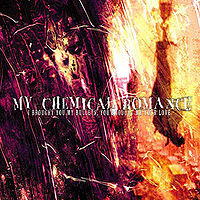 I Brought You My Bullets, You Brought Me Your Love

My Chemical Romance’s 2002 debut seems to take an obvious cue from the Used—a band with whom they were, at the time, friendly with and influenced by. The raw, tormented emo-punk on this album, which they recorded only a few months after forming, has distinct correlations with the Used’s 2002 self-titled debut, but in truth the discs are contemporaries of one another. I Brought You My Bullets, You Brought Me Your Love is a relatively makeshift album, with moments that feel almost haphazard, but some of that chaotic sensibility lends the album—most of which was produced by Thursday’s Geoff Rickly—its charm.

The jumping punk number “Headfirst For Halos” and the screechy “Honey, This Mirror Isn’t Big Enough For The Two Of Us” offer early inklings of what MCR would later become. While some of Bullets is a little too rough and messy, these numbers reveal a bright future for the band in transforming the depressed side of emo into a raucous, frantic outpouring that allow singer Gerard Way’s anxiety about the world to become engaging, interesting songs. “Vampires Will Never Hurt You,” the album’s second single, is the most apparent clue to how successful the band would eventually grow to be. The song, with its hooky chorus, wouldn’t sound out of place on 2004’s Three Cheers For Sweet Revenge, with additional production, and stands up as one of the better songs the band have written.

Bullets recalls a screamier time in pop-punk and emo, and subsequent releases have clearly evolved Way’s yelping screech to a compelling, gulping howl. It’s is more of a niche album than, say, The Black Parade, offering both a reminder to older fans of how MCR have changed and a glimpse to newer fans of how the band began.