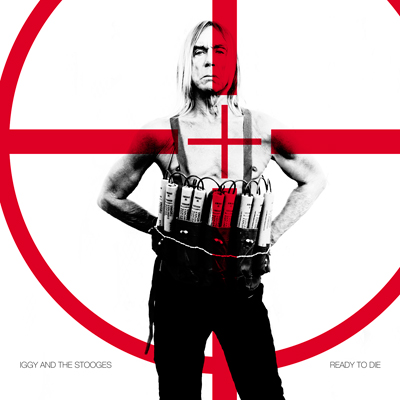 Anticipating a return to the Stooges' serpentine, napalm-hearted '70s sound? You'd be better served dusting off your copies of Raw Power or Fun House. Looking to rubberneck on another soulless effort just like the band's first reunion record, The Weirdness? Well, you're getting warmer. But here's the strange thing about Ready To Die: it gets the reconfigured quintet no closer to “Search & Destroy,” yet this time around, they make their advancing age work to the music's advantage.

The success of Ready To Die comes almost entirely from the mind and voice of Iggy Pop. On The Weirdness, he was the odd man out, leaving befuddling lyrics and flat tones all over the album's 40-minute running time. Here he sounds downright spritely and feisty. Not “TV Eye” feisty, mind you; just riled up enough to make an ode to big breasts (“DD's”), and the winking “Sex And Money,” come off as, well, sexy. And instead of going into the red making fun of pro-firearms conservatives on “Gun,” he hangs back and rides the band's groove like the steady current it is.

The other missing element from The Weirdness was a sense of confidence in the band. The music had a self-consciousness to it, as if the four musicians were overly concerned with living up to a much-vaunted legacy. On Ready To Die, the players may be the same (though it must be noted that guitarist James Williamson is back in the fold after the untimely death of founding member Ron Asheton) but they aren't interested now in taking their influences and grinding them into a new sound. They're confident enough to let the R&B, funk and blues come out unadorned, lighting multiple three-alarm blazes throughout.

Lest you think we're marking this a masterpiece, rest assured that there are plenty of duds. For some reason, the Stooges decided to get moody on a trio of acoustic-based tracks, letting their singer respond by going into full on crooner mode. That sort of twaddle may fly on Pop's solo records, but when they go up against the slinky, deep pocket grooves of the rest of the album, the songs feel pale and hollow.