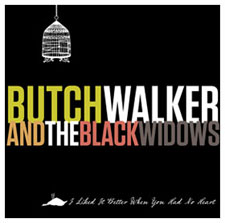 I Liked It Better When You Had No Heart

Say what you will about Butch Walker's day job. Sure, the pop production maven has written and produced hits for some less-than-credible musicians (oh, hey, Lindsay Lohan, what's up?), but in the end, Walker has always been able to separate his production work from his solo material. From his arena-rock debutLeft Of Self-Centered to his glammed out The Rise And Fall Of Butch Walker And The Let's-Go-Out-Tonites and through his contemplative singer-songwriter days, it's clear Walker's influences are more closely aligned with T. Rex, Tom Petty and Nick Cave than the shallow pop records he often produces.

It's also clear Walker seems to be more concerned with making his own honest music than penning himself a bunch of hits. You get the feeling that if he really wanted to, he could release a disc filled with nothing but smash singles. But perhaps the most impressive part of Walker's solo career is his chameleon-like skill to adopt a certain genre and do it better than most. It's been a trademark of his solo material for years, and it's front and center on I Liked It Better When You Had No Heart. A natural extension of 2008's folky, stripped down Sycamore Meadows, Walker's patented wit is here in full force as he pokes fun at his hair-metal early days on raucous "She Likes Hair Bands," while his poignant personality shines as pleads with his mother, "Why must you complain?/I grew up all right, so don't be ashamed/My mouth has been cleaner, and I may have lost all my faith/But until I believe in myself, I can't give my conscience away" on the harmony-heavy country-tinged ballad "Canadian Ten."

I Liked It Better When You Had No Heart is in many ways the antithesis of the records Walker produces as a job. His work for others is typically crystal clear, bursting with auxiliary percussion and keyboards and other add-ons that sometimes leaves the mixes feeling a bit stale. But these songs are filled with life and slight imperfections–ever-so-slightly flubbed guitar lines, the small nuances and cracks in Walker's smoky tenor–that give the songs on Heart a personality and character. The big hooks are fewer and further between, but the meat in the middle is where the real magic lies.