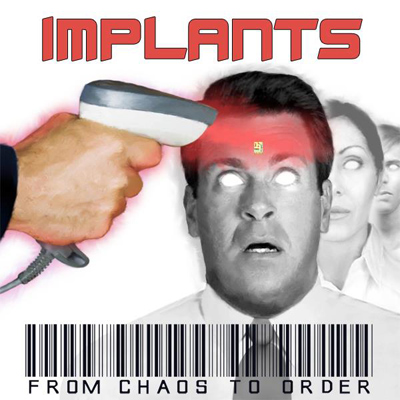 From Chaos To Order

Either there’s a full resurgence of mid-’90s melodic hardcore afoot or a bunch of 40-something dudes from all of those bands are getting serious hankerings for another try at the scissor-kick leap before their bodies won’t let them do it anymore. Implants are a ’90s SoCal punk supergroup of sorts, featuring members of Strung Out (guitarist Rob Ramos), Pulley (guitarist Jim Blowers), Ten Foot Pole (bassist Chris Del Rio and drummer Chris Dalley) and Ken Conte, the singer from Brown Lobster Tank. (How many remember their sole 1995 album, Tooth Smoke? Hey you: the one sporting the blue crew cut and knee-long wallet chain in the back there!) Fans of those bands will be all over From Chaos To Order like Steve Caballero at a Warped Tour half-pipe. Everyone else in the world will be wondering why those drumbeats are so comically fast and why that tough-looking dude with the microphone is trying so hard to sound sensitive. “Blinded” is the best slice of nostalgia here: a fitting title considering it features Ramos’ patented, blinding metallic guitar soloing. Mostly, this is the sound of the ’90s done Fat Wreck Chords/Epitaph-style (on the new record label from El Hefe of NOFX, to boot), in all of its heart-on-sleeve heavy-handedness and infectious energy. And that was ’90s melodic hardcore for you: often confounding, sometimes dumbfounding, but always totally awesome. Any aging punk could easily skate a mini pipe to “These Walls” with his buddies and pretend he’s 19 (or at least 29) again.