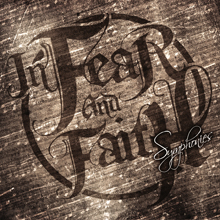 In Fear And Faith

Following the drama surrounding the departure of screamer Cody Anderson last year, In Fear And Faith have been left with only one vocalist: Scott Barnes. Consequently, on this stopgap seven-track EP of orchestral reworkings of old songs, he’s calling in old friends for help. Four tracks feature guest vocalists—Nick Martin of Destroy Rebuild Until God Shows on “Bones,” Tyler “Telle” Smith of the Word Alive on “The Taste Of Regret,” Caleb Shlomo of Attack Attack! on “The Solitary Life” and D.R.U.G.S. frontman Craig Owens on “The Road To Hell Is Paved With Good Intentions.” Smith, of course, was the band’s original clean singer, and recorded “The Taste Of Regret” on their debut EP, 2007’s Voyage, while Owens sang on “The Road To Hell…” in its original version, on 2009’s Your World On Fire.

The orchestral arrangements feature drums, keyboards and some subtle electronics, plus lots and lots of surging, swooping strings, and they reshape the songs pretty radically. “The Taste Of Regret” gets reworked most substantially; formerly four minutes and change, it’s now more than six minutes long. Whether this EP will appeal to anyone beyond In Fear And Faith’s most diehard fans is an open question; if these were the only versions of these songs to exist, it would be a downright bizarre stylistic choice. But if you like screamo/metalcore bands’ lyrics even if you think the music all sounds the same, this could help you make your case to skeptics.

“The Taste Of Regret”