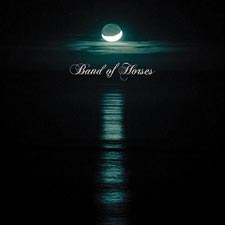 Band of Horses' first two albums, 2006's Everything All The Time and 2007'sCease To Begin, were near-perfect distillations of roaring twang, indie folk and timeless jangle. Vocalist Ben Bridwell whispered and yelped lyrics that were alternately joyful and broken, his reverb-haunted voice comparable to My Morning Jacket's Jim James after huffing helium. On the strength of these releases, the South Carolina-via-Seattle band earned heaps of rave reviews and an ever-increasing fan base.

Arms' strength is its diversity. The Smiths-esque title track and acoustic-guitar-driven "On My Way Back Home" both soar with quiet grace. In contrast, the brisk "Dilly" sounds like a fleshed-out Elliott Smith while the raucous barnstorm "NW Apt." charges forward with punk-leaning drums.

And therein lies the problem: At its best, Arms is a pleasant album, one that sounds good on the surface or as background music. For most bands, that's perfectly acceptable. But for a group like Band Of Horses–whose ambitions have always intersected with being meaningful and transcendent, too–somehow just being acceptable makes Arms fall short.