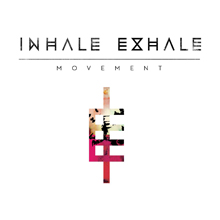 Inhale Exhale are back after a brief hiatus, with Movement, their fourth full-length, an album that will likely feel too familiar to anyone who has listened to a decent amount of post-hardcore or metalcore over the past half decade or so. However, there might just be something here that’s worth waiting for. The toughest part about combining aggression and melody is making it feel natural. It’s really hard to do. It’s not just about cobbling disparate parts together. It’s about finding ways to get the opposite poles of that sonic magnet to facilitate each other. It’s about flow. And there’s little of that to be had here.

Movement bursts out of the gates according to the formula described above, a harbinger of what’s to come. The album’s second song, “Party Drama,” has the potential to be a beast of a track, featuring plenty of thrash and mosh-worthy breakdowns and a killer Lamb Of God-styled riff, but the band fall victim to what has plagued many bands of its ilk over the past decade: shoving an awkward melodic part  (which is neither memorable, nor all that melodic) into a song that might not necessarily need one—thereby derailing an otherwise solid song. And if forced melody wasn’t enough, the distorted/filtered and chopped “Yeaaaah!” before the outro (a technique which has inexplicably found its way into almost every single nü-post-hardcore record of the past five years) further cheapens the whole affair. But maybe that’s what the kids like.

The third track might be about lusting after a stripper. Or a woman who should be a stripper. Or a hooker. Or something. And the most disappointing part about that is the lyrics (“She works the crowd just like it’s her job, twisting their heads and dropping their jaws/So forgive me love, I cannot stay away from everything/You’re toxic and rotten to the core”) come during what is undeniably the most memorable and melodically sound chorus on the entire album (a la early Circa Survive). It just feels like an opportunity squandered. But maybe I can’t relate, because I’ve never lusted after a toxic and rotten woman. Or maybe it’s about Lisa Lampanelli and this song is perfect.

The album misses its mark again in the seventh track, “Carpe Diem”, which is a furious blend of shredding, bogged down by the “melodic part.” It doesn’t need to be there in every song, guys. If you want to get crazy, just shred, mosh and scream a song to bits.

The rest of Movement follows a similar pattern: tons of “Open this motherfuckin’ pit up” mosh parts and southern rock/metal riffs that you’ve probably heard before, buffered by melodic parts that feel like base-level melodies laid over progressions that don’t particularly lend themselves to melody, balanced by Every Time I Die-lite spazzy discordant parts. It’s a record that has its moments, but you’ll have to work for them. Ironically, the chorus of the album’s opening track, “Aesthetics” contains the lyrics, “One day it will get better/but I’m not quite sure how long we will wait.” With regards to Inhale Exhale, I can’t really disagree with any of that.