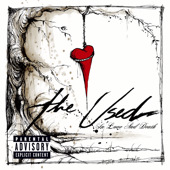 In Love And Death

The Record company wants a hit, the fans want the exact magic the first album stirred, and the haters need something to bitch about in addition to the new Good Charlotte release. Truth is, In Love And Death is an ambitious venture that sports a shit-eating grin to everyone who's ready to stick a fork in the Used's ass and declare them over.

In Love And Death suffers opens with the frantic "Take It Away," incorporating driving riffage, samples, drum & bass percolations and Bert McCracken's crazed shrieking. Drummer Branden Steineckert's accents on "Let It Bleed" underpin his bandmates' urgency, while "Listening" reminds listeners that both whispers and screams can significantly raise neck hairs. The skittering, melodic crunch of "Sound effects And Overdramatics" is just as great as anything off of the last Deftones album.

If In Love And Death suffers from anything, it's from occasionally being too earnest in its delivery, weighing heavily on the "emo," and not the "scr" part of their equation. "I Caught Fire (In Your Eyes)" will appeal to the most Yellowcard-damaged youth of today lining up outside MTV studios to get into a taping of TRL, and "All That I've Got" will be the slow dance at this year's homecoming soiree. Fortunately, "I'm A Fake," with its twisted spoken intro and caffeinated velocity, finishes the proceedings off mightily. Conventional wisdom says the Used's run at the top won't last forever; fortunately, careful listeners will find evidence of a career worth following. Sign my ass up.