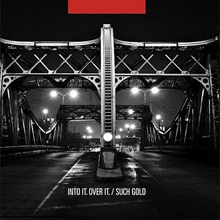 Into It. Over It./Such Gold

This split 7” is the final installment in Into It. Over It.’s Twelve Town series, and features two songs by prolific Chicago songwriter Evan Weiss as well as a pair of entries by Rochester, New York’s Such Gold. First, Weiss’ cuts: While the Jawbox-influenced “Washington, DC” (how fitting!) is interesting, the underwhelming “Portland, OR,” kinda lulls its way into two high-energy tracks from Such Gold. Their first song, “Minstrels,” storms out of the gates with a Propagandhi-esque riff and hits all of the melodic pop-punk pressure points: speedy riffs, knockout drumming, screamy and melodic vocals trading off and hopeful lyrics. Believe it or not, they up the ante on “The World That You Live In,” an almost serpentine take on fast, melodic hardcore. Kid Dynamite come to mind, as do Lifetime. So, really, the best of both worlds from Such Gold, and a pretty solid split 7-inch all around.

Such Gold’s “The World That You Live In”