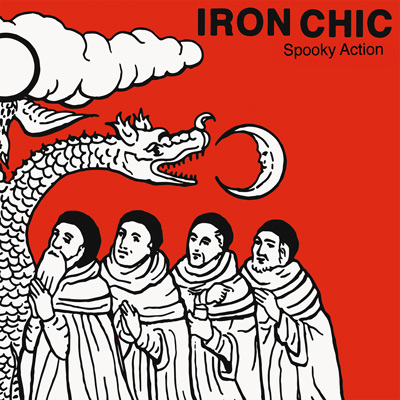 The most exciting aspect of Iron Chic’s Spooky Action EP is simply that it contains new material. The Long Island band (featuring former members of Latterman and Small Arms Dealer) have honed a steady sound of sort-of-gruff, sort-of-emo, melodic punk rock since their first demos in 2008. However, over the years, Iron Chic have outputted only one full-length and a few EPs that have barely satiated fans’ want for their music. Spooky Action’s release is riding on the April news of Bridge Nine signing the band and serving as a precursor to their highly anticipated sophomore full-length expected later this year.

This Bridge Nine version of Spooky Action contains three songs—two new ones and a cover of Ramones’ “Bonzo Goes To Bitburg.” While the Ramones cover is a neat listen, really the most exciting parts of the EP are the two new songs “Spooky Action At A Distance” and “Less Rest For The Restless.” Both are solid songs, in true Iron Chic fashion; they are undoubtedly a band that continuously deliver. “Spooky Action At A Distance” is the standout track of the two, clocking in at a lengthy (for punk rock) 4:26. Its opening refrain of “You make time stand still” will sit hauntingly in your ears from your first listen and its extended (but not drawn out) honest ode to a true love is well executed both in words and music. It's easy to visualize a pile of guys near the front of the stage singing gang vocals with a hand on their heart and a finger pointed in the air. The shorter and faster “Less Rest For The Restless” is equally as good, in a different vein. Simply put, it’s a great sing-along punk song.

“Spooky Action At A Distance”