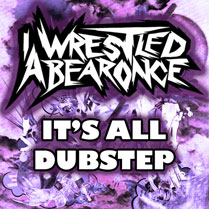 Let’s get one thing straight right off the bat—we do appreciate dubstep. It’s a form of dance music that can be exciting, inventive and a riot to shake the booty to. Those low, sub-dwelling beats and huge breakdowns—awesome! But only if they are done properly. Louisiana metalcore merchants Iwrestledabearonce have soiled the name of dubstep (and themselves) with this incomprehensible new EP, It’s All Dubstep. The band’s insidious brand of joke metalcore was humorous for their first EP and album, but this might be the release that puts the nail in their coffin. Featuring dubstep remixes from It’s All Happening, It’s All Dubstep tests the boundaries of our eardrums—and our sanity. Seriously, who can keep it together for five songs of the worst amalgam of joke metalcore and dubstep? We have our limits. As is often the case with this band, it’s nearly impossible to tell if they are seriously experimenting with a genre they appreciate, or if they are just fucking with us again. Unforgivable.

“See You In Shell (Sluggo Remix)”