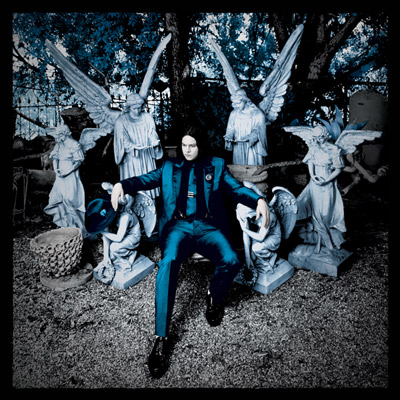 Jack White is not the bantam rooster prince of the deconstructed blues. Hasn’t been for a while. These days, White is a distillation of Tom Waits’ Luddite-approved technology and a middle-aged science teacher who enjoys freaking out his bored students, all wrapped up in the body of a 21st century, hard-rockin’ dandy well-versed in rock culture and modern couture as he is in antique guitar pedals. He might have an ancient record-your-own-vinyl-record booth in his home, but his phone might crumble under the number of apps he has to seek out records, vintage instruments and junk furniture. White is a sonic gallant with a deeper understanding of thee almighty vibe. The reason why people come back to him is because he continues to serve up technique, panache and wicked guitar tones while refracting a vast knowledge of rock history through a funhouse mirror of his own design.

Lazaretto is more jubilant, unbridled and manic than 2012’s Blunderbuss, the majority of which seemed dialed-down to relay a melancholy emotional context (the first post-divorce record, as well as the first one under his own name). Those sentiments are still here, but the best ones (“Just One Drink,” “Alone In My Home”) are more conducive to bar fights or mobile-home vandalism—moments that make you feel alive. What you really divine from Lazaretto is that by the end of it, you’ll feel like you’ve entered a Ph.D. program of rock history. He chrome-plates the blues on the playa anthem, “Three Women” in a way that recalls legendary rock revues like Bob Dylan’s Rolling Thunder and Joe Cocker’s Mad Dogs And Englishmen, all fueled up with $500 bottles of wine, PBR tallboys and dirty sweat. The title track is all swagger and bullshit braggodoccio (“When I say nothing/I say everything”), laced up with amazing violin lines (courtesy of Fats Kaplin) and peppered with space-age guitar tones and primitive synthesizer pulses. (Or maybe White’s pouring whiskey down the back of an amp and recording its demise. Would you dare put it past him?) The essence of the album (hell, White’s total raison d’etre as an artist) is the brooding instrumental “High Ball Stepper,” where the all-female ensemble brings great menace (dig pianist Brooke Waggoner’s jarring Cecil Taylor homage) while their leader offers several guitar tones, one of which would significantly loosen the bowels of Skrillex and Trent Reznor. The frantic, loping “That Bat Black Licorice” feels like a test-tube baby of Frank Zappa and the Pogues, further bolstered by vocal arrangements that can make you envision the errant spit flying out of his mouth.

Jack White is well-versed in the adage that idle hands are the devil’s workshop, but we all know he’s built quite the career navigating both the sacred and the sinister. Lazaretto finds him simultaneously unbridled as a player, yet meticulous as both mad scientist and personal diarist. I want to invite him to my house to play records, drink cold beverages and help me refurbish the antique fainting couch I got in my divorce. At the end of the day, White deserves the hype because he does the fucking work. Because when you need a job done—whether it’s upholstery or positively compelling rock music—you’re better off going to a professional.