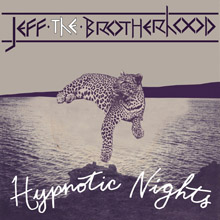 When word came down that Black Keys frontman Dan Auerbach was going to be behind the controls of the new Jeff The Brotherhood album, the hope was that he would bring back in some of the garage rock looseness that marked the band's earliest work but has been systematically chipped away over the years. Alas, the Orrall brothers have instead doubled down on a sleek commercialized sound sure to appease their new corporate overlords. (This is the group's first for Warner Bros.) It's a shame, too, as a little grit and swagger could do wonders for a number of pretty good songs on Hypnotic Nights, like the charged up punk of “Staring At The Wall” and the nicely appointed power pop of “Sixpack.” Otherwise, Hypnotic Nights has the feeling of an album created by Venn diagram, with the outer edges of glam, psychedelia, garage rock and hard rock connecting to create “the ultimate rock album…you know, for kids!” As far as Auerbach's listing as producer seems largely like an honorary title. It's akin to Elvis Costello's credit on The Specials' debut LP—something to attract the attention of potential curiosity seekers. He leaves no real imprint on the sound of the album outside of the occasional splash of Hammond organ and a bit of reverb. Otherwise, this is all Jeff The Brotherhood's show—and a reminder of what little they have to offer to today's musical landscape.

“Staring At The Wall”