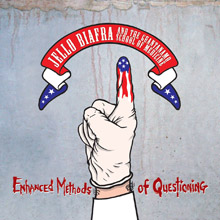 Jello Biafra And The Guantanamo School Of Medicine

It’s not impossible to age gracefully within the confines of punk rock. Ian MacKaye’s done it; so has Henry Rollins. Jello Biafra hasn’t. And it’s too bad, because of the three, he’s probably made the greatest sacrifices for his art and his beliefs. Biafra is a true free-speech icon who spent years in court fighting an obscenity bust for a poster included in the Dead Kennedys’ 1985 album Frankenchrist. But based on what he’s been doing musically in the last few years, it seems like he may have finally lost it completely.

His first album with backing band the Guantanamo School Of Medicine, 2009’s The Audacity Of Hype, had some decent songs and featured a fairly killer lineup that included two guitarists, moving the music out of the realm of hardcore or punk and towards psychedelic hard rock. Unfortunately, the lyrics were a mixed bag—some songs were trenchant critiques of modern society, while others were already-outdated jabs at the George W. Bush administration. This new EP, while it’s still got some quality music on it, travels even further back in time to find things to complain about; “Dot Com Monte Carlo” is a tirade about how yuppies in the high-tech industry have made San Francisco too expensive for Jello and his punk-rock buddies to live in, a subject it’s difficult to imagine anyone in the rest of the country caring about, especially when he starts in on a highly specific list of streets and places that are overly yuppified. And “Miracle Penis Highway” is a seven and a half-minute(!) song about Bob Dole and Viagra, a subject that was already tired a decade ago.

And let’s not even get into the 18-minute closer, “Metamorphosis Exploration On Deviation Street Jam.” Okay, let’s. It’s a dubby, acid-fried, one-riff jam over which Jello relentlessly declaims his own iconoclasm and awesomeness, talking about how going against punk orthodoxy makes him super-duper-ultra-punk, or something. At one point, he talks about how he’s been into rock ’n’ roll since he was seven years old—in 1965. It’s hard to be sure whether he means to come off as punk’s pissed-off grandpa, or he’s just so lacking in self-awareness that he doesn’t take even an instant to question who would want to hear him jabber endlessly about this stuff. He should be admired for battling censorship, but he should have exercised some self-censorship before releasing a record this half-baked and pointless.

“The Cells That Will Not Die”