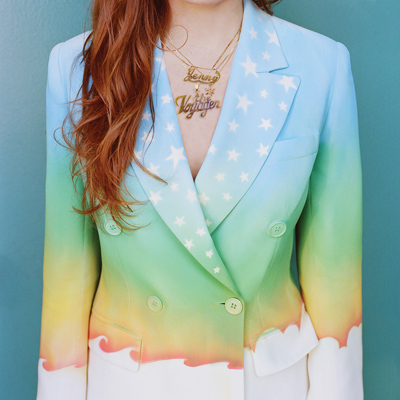 Jenny Lewis’ latest solo venture is a difficult listen. Not the music on here, mind you. These 10 tracks are completely easy on the ears and the constitution, and have been scrubbed and moisturized to give it a soft, supple glow. The hard part is trying to shut off the part of one’s critical brain that can’t see this as anything more than a huge swing for the chart success on the part of Lewis and her collaborators.

It’s a terribly cynical way to look at The Voyager, but was there anything in her discography—from her days in Rilo Kiley to her work with Johnathan Rice—that would have paved the way for such glossy, radio-friendly pop as this? There are hints, sure, but this feels downright blatant. We can’t really fault her for that. She’s likely hit the ceiling of being an indie success story, and has won over the All Songs Considered/Starbucks crowd with her last few records. Why not push into the echelon and go for the adult contemporary money?

What is likely going to be her undoing is the fact that, lyrically, she’s just as cynical and wry and truthful as ever. Push aside the silly video with female celebrities going drag king and “Just One Of The Guys” turns out to be a smart and funny rumination on the nature of female sexuality and the expectations often tied in with gender. “Late Bloomer” is as great a story as Lewis has ever told, this time building off of her time backpacking through Europe as a teen to tell the tale of a young woman engaging in eye-opening life experience. Throughout the album, she curses, gets stoned and opens up her diary to some of the most painful and profound entries.

The contrast between the bitter lyrics and the sweet music makes for an easy enough listen, but we couldn’t help yearning for more bite to these songs. Nothing is given over to chance. Every chiming guitar chord, spinning bit of electronic keyboard and multi-tracked chorus has been retrofit from the sounds of ’70s AM radio. The sanguine quality doesn’t go down easier knowing that she worked with folks like Ryan Adams and Beck on this material. Rather than try and move these songs into new territory, everyone involved seem hellbent on remaking Lewis into something closer to Sheryl Crow or Shania Twain. It’s a weird place for her to be in, yet one that she looks to be acclimating to quite easily. Let’s hope she enjoys the ride while it lasts.