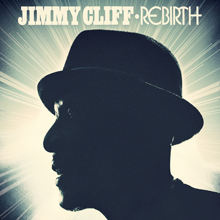 Jimmy Cliff is not a likely candidate for the American Recordings-style, late-career comeback. Since his 1970s heyday—most notably with the game-changing soundtrack of The Harder They Come—the singer has maintained his status as one of reggae’s most dependable artists. But there’s been a slick sheen and bloodless professionalism with much of his recent output. That’s been rectified with Rebirth. Just as Rick Rubin revitalized Johnny Cash two decades ago, producer Tim Armstrong has injected a fresh dose of passion and urgency into Cliff’s stately, soulful voice. The Rancid frontman has done more than just produce; he also leads the backing band as guitarist, and he co-wrote many of the tracks with Cliff. Of those collaborations, the keening, organ-drenched “Cry No More” and the outraged but upbeat “Children’s Bread” are most successful. Each sounds like a lost classic of late-’60s/early-’70s Jamaica, infused with warm, vintage tones and bare-bones arrangements.

Cliff also performs much-needed overhauls on older songs of his, such as the haunting, harrowing “One More.” Surprisingly, it’s the disc’s two unlikeliest remakes—the Clash’s “Guns Of Brixton” and Rancid’s “Ruby Soho”—that truly shine. The apocalyptic skank of “Guns” is sung by Cliff with such ghostly dread, it sounds like the Clash covered him. And despite the fact that “Ruby Soho” is originally a straight-up punk tune rather than one of Rancid’s ska excursions, Cliff credibly reggae-fies it, drawing out a wistful poignancy that Armstrong himself never mustered. But it’s the Cliff/Armstrong composition “Reggae Music” that’s the crowning jewel of a flawless album. Over a lush, jaunty rhythm steeped in syncopated swagger, Cliff cuts loose with the full, sweet force of his voice—in the meantime delivering a mini-lesson on the history of the genre. Cliff has never needed to reaffirm his place in the reggae pantheon. With Rebirth, he went ahead and did it anyway—and then some.