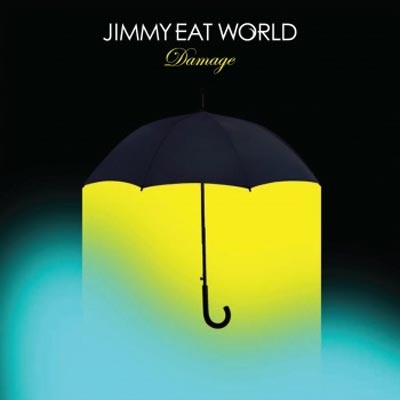 After one listen of Damage, Jimmy Eat World’s eighth full-length (and first for RCA Records), one thing will be abundantly clear: Either frontman Jim Adkins had his heart broken pretty goddamn badly at some point during the past few years, or he is remarkably good at faking it. Instead of continuing down the odd lyrical path he explored on 2010’s uneven Invented, where he publically stated he was drawing inspiration from random photographs and inventing stories for each, Damage feels extremely personal. There’s the yearning for reconciliation (the title track), the admission of weakness (“Lean”), the realization of romantic failure (“Book Of Love”), the petty jealousy (“I Will Steal You Back”) and the wistful reminiscing (“You Were Good”). Damage might as well be the 10 stages of grief when it comes to heartbreak.

Of course, none of that would matter if the songs weren’t any good. Thankfully, Damage easily bests the previous two Jimmy Eat World full-lengths, and its high points rival those of Futures and Bleed American. Recorded to tape by Alain Johannes (Queens Of The Stone Age, No Doubt), the album is full-bodied and warm, with an organic bleed from the drum mics and a sonic resonance you just can’t get digitally. (That last sentence is just a fancy-ass way of saying this album sounds pretty fucking great.)

It’s a tight, compact record, too; there aren’t any elaborate, extended instrumental passages or over-indulgent guitar solos. It’s a meat-and-potatoes rock record in the same vein as Bleed American, only less aggressive at the outset. “Please Say No” is a lush ballad with spot-on backing vocals; the bouncy, acoustic-driven “Book Of Love” could’ve come off Maritime’s We, The Vehicles; “Appreciation” slides effortlessly between 4/4 and 3/4 time, carrying a vintage JEW vibe not seen since the late ’90s; and the album’s absolute standout, “No, Never,” is a driving guitar-rock number with a shimmering chorus and a hint of new-wave synth. It doesn’t overpower the track, just as each member of Jimmy Eat World doesn’t overplay on any of the songs—they’re four extremely talented musicians who know when to hold back. That’s called good songwriting, that’s something you can’t teach a band, and that’s why Jimmy Eat World continue to stay relevant.