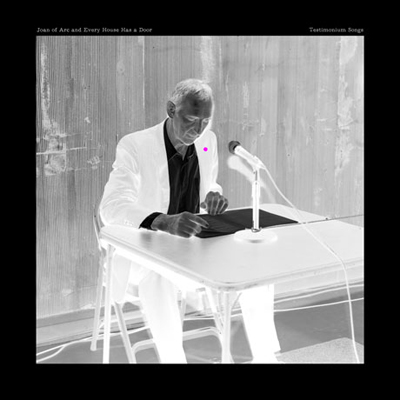 No Joan Of Arc album is ever just an “album” anymore. These days, this ever-evolving collective usually write and record music with a broad or specific conceptual framework in mind. In recent years, that has meant anything from a wall-cracking live soundtrack to the silent film The Passion Of Joan Of Arc or, as with 2009's Flowers, booking two days of studio time and recording completely improvised songs using whatever instruments were lying around. For the post-rock band's latest work, the songs were created to coincide with performances by a Chicago-based theater troupe Every House Has A Door. The band—in trio form this time around—played them live alongside modern dancers and an actor reciting objectivist poetry built from court testimonies from the early 20th century.

Joan Of Arc thrive on having such strictures and concepts placed on them. The mindfulness of being part of a larger event is what helps keep the band impressively reined in on Testimonium Songs. The trio apparently worked on these six songs over a two-year period, honing them into sharp, meticulous compositions. The nearly 14-minute “The Bird's Nest Wrapped Around The Security Camera” is a carefully constructed edifice of crisp drum fills, warped guitar lines and wordless vocals. The effect is tense, with the subconscious knowledge that one flub by percussionist Theo Katsaounis could send the whole thing toppling apart. Other songs are performed a cappella, inspired by the clean lines and odd meter of poets like William Carlos Williams and Charles Reznikoff. (His unfinished Testimony was the basis for the theater piece.) The lyrics never resolve properly, and by the time the melody and rhythm is established, the sung pieces reveal their fractured nature: “I hope I have/Adequately demonstrated/My emptiness.”

What's missing is the bigger picture: Taken alone, these six tracks are fascinating enough from a conceptual standpoint, and listening to a band audibly restraining themselves is quite scintillating. But it's hard to shake the feeling that these pieces would likely have a significantly greater impact when connected with the entire Testimony performance.

“The Bird’s Nest Wrapped Around The Security Camera”