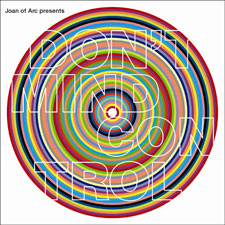 Arguably among the most fearless of modern indie bands, Chicago's long-running Joan Of Arc refuse to follow traditional paths or formats. Paths and formats ineluctably lead to mediocrity or worse, and this is a group who'd rather risk failure than be boring.

Don't Mind Control is not a standard-issue Joan of Arc album (though little in their catalog is anything close to uniform). It includes 18 songs performed by over 40 of the band's collaborators and friends. The music goes from the minimalist electronics of Litesalive to the dingy garage rock of Disappears. A Tundra deliver one the more notable tracks with "The Doug McComb Over," which is a brilliant collision of blues and math-rock. Bigger names like Owen and Cale Parks take part, offering exceptional pop-soaked fare. Like nearly everything Joan of Arc have done, the leitmotif of the album is experimentation. No one hands in any song that is typical.

What ultimately prevents Don't Mind Control from entirely succeeding is the inevitable lack of cohesion. The random nature of the participants and contributions lends more of a mix tape feel. Nevertheless, few bands have attempted something as daring. Certainly an interesting endeavor, Don't Mind Control offers fresh music from and for the musically adventurous.