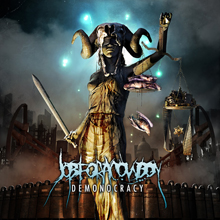 Job For A Cowboy

Job For A Cowboy are one of the best technical death-metal bands in America right now, and Demonocracy—while not quite as mind-blowing as 2009’s Ruination—is nevertheless an ass-kicking, skull-cracking record. Frontman Jonny Davy remains one of the most unique and recognizable vocalists in metal; his mix of low and high eruptions conjures up an image of a two-headed beast made of the Black Dahlia Murder’s Trevor Strnad and Lamb Of God’s Randy Blythe, but even more pissed. As on the last album, the final track, “Tarnished Gluttony,” is longer and slower than anything that came before, six minutes of death-marching brutality with some truly impressive guitarwork on top. The presence of new guitarist Tony Sannicandro adds a lot to their sound; his solos are at times nearly breathtaking. New bassist Nick Schendzielos (formerly of the pothead art-grind act Cephalic Carnage) locks in quite well with drummer Jon Rice. With Ruination and last year’s Gloom EP, Job For A Cowboy shrugged off the “deathcore” tag once and for all; now they’re out to rule the tech-death scene, and if they keep making records this great, they’ll succeed.