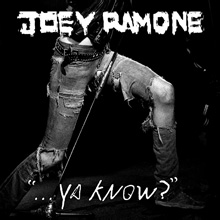 There’s no denying that Joey Ramone was one of the most important musical figures of the 20th century. His strange frame stood powerfully onstage, giving hope to all the ugly outcasts that they could someday do the same. The cruelest joke is that Joey Ramone, a man musically inspired by the big pop stars of the ’50s and ’60s, would never truly attain his legendary status until after his death. In his wake, Ramones have only grown in popularity—even birthing a sub-genre of pop-punk, lovingly referred to as Ramones-core.

Simply put, it’s exciting that there’s more music from Joey Ramone to be enjoyed. Culled from home demos and assembled posthumously by brother Mickey Leigh and Ed Stasium (producer and engineer on many a Ramones album), “…ya know?” manages to maintain a cohesive sound despite its disjointed source material. While most of the record leans towards the harder sound of Ramones' Too Tough To Die and away from the Phil Spector-inspired melodies of Ramone's first solo album, Don't Worry About Me, the real treats are where we hear Ramone doing things outside of his familiar context. “Waiting For That Railroad” is a slow-burning, harmony-laden acoustic number with a smattering of accordion and little more than the refrain “Sitting here/Thinking of you/And I’m waiting for that railroad/To go home.” An alternate version of “Merry Christmas (I Don’t Want To Fight Tonight)” (originally from Ramones' 1989 album Brain Drain) sounds more like the Righteous Brothers than, say, Teenage Bottlerocket. It proves that Ramone’s talent could have transcended genres had the man not succumbed to lymphoma shortly after his band’s breakup. Luckily for us, though, there are still a few gems that have thankfully been unearthed; we can only hope that in another 10 years, Leigh and company might find a dozen more.

“Waiting For That Railroad”