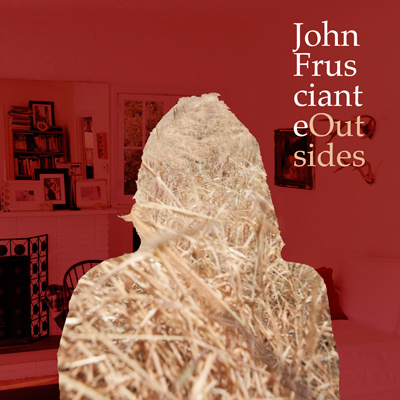 When it comes to the work of former Red Hot Chili Peppers guitarist John Frusciante, it's best to push one's expectations aside. The mercurial 43-year-old has been following his own disturbed muse since he joined the aforementioned funk rockers back in 1988. It's only through his solo work, though, that Frusciante has allowed his unhinged vision of the musical world to come to the fore, whether that be in stream-of-consciousness rambles (see 1994's Niadra Lades And Usually Just A T-Shirt) or angular synth-pop (2001's To Record Only Water For Ten Days).

His current release, Outsides, finds Frusciante in what he calls “out” mode, exploring textures and freeform rhythms inspired by free jazz. Of course, since he's recording all of this on his own, that comes out as Autechre-like electronic experiments that don't resolve or adhere to a steady beat. The stitched together samples, drum machine splatters, and foreboding synthesizers come across like the soundtrack to a particularly quick edited and terrifying lo-fi horror flick.

On their own, the two most freaked-out songs here would make for a great 7-inch, but they feel a little lacking when placed up against the massive 10-minute track “Same” that starts off the EP. The song is primarily an excuse to let Frusciante show off his still-incredible guitar skills. Accompanied by a drunken drum loop, he sends his axe through a bevy of effects pedals, making it sound more and more synthetic as the song goes on. But you still catch wind of his jazzy, fleet-fingered fretwork throughout. As ever, no matter how fucked up everything else around it sounds, that is what is front and center on this EP—and, as ever, it's always a great thing to hear.